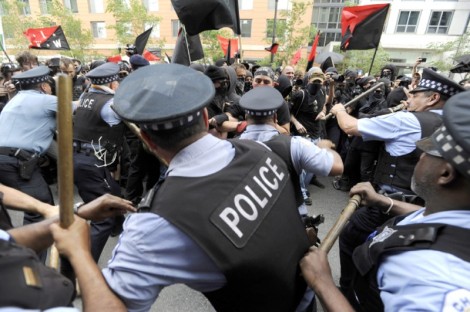 Four Star Anarchist Organization isn’t a faceless political group — we’re a collection of unique Chicagoans with a variety of experiences, perspectives, and ways of expressing ourselves. Our diverse strengths have never been more apparent than when NATO came to town last May. We had members marching with their union, providing crucial medical care, distributing protest survival kits, rejecting their military service medals, and taking arrests in defense of their comrades. Some of us stayed home with our phone ringers turned up, frantically refreshing our newsfeeds and hoping for nothing but good news. Several of us worked with a photographer who wanted to document a Chicago radical group planning for NATO — you can view a slideshow of the photos here.

From Anarcho-Baby, a parenting blog run by one of our members.

Not gonna lie, having a baby is both a burden and a blessing.  This past weekend, it was probably more of a blessing.  August chose the peak of the NATO Summit protest to develop a raging fever, which probably saved one or both of us from going to jail.

Here’s what happened:  I was supposed to be downtown on Sunday volunteering at a free clinic set up for the week.  I had already gone Saturday.  Bill was hanging with August for the weekend.  Neither of us can afford to get arrested (Bill is job-hunting and I am afraid of being a nursing mama in jail), so it was a pretty good arrangement, as long as I was uber-careful when I was downtown.  Chicago was effectively a police state at that point, and there were cops at every train station, and cameras and helicopters everywhere, on the lookout for people who “look like protesters.”  The feds had already been knocking on our friends’ doors purely to harass them—and probably tried ours but we’ve dismantled our buzzer—so  I covered my tattoos and wrote the NLG’s phone number on my stomach instead of my arm and kept my head low.

Question:  What happens to nursing mamas in jail?  Not nursing or pumping can lead to mastitis, or at least serious discomfort, and hungry babies.

Sunday morning, August develops a fever of around 102.  That means I stay home.  We’re hanging out that day, monitoring what’s going on downtown, and shit hits the fan.  Cops start beating and arresting people (like they do) and Bill is jonesing to go join in the fray.  We check August’s temp again and it’s a rockin’ 103.6. That means we head to the ER.

Turns out, he’s “fighting a virus.”  The type of virus is unclear, but he’s otherwise perfectly fine (not even dehydrated, which I’ll get to in Pt. 2), and they sent us home with the promise of a rough week.

BCF is a dirty bedroom in Chicago that some folks use to make and distribute swag and propaganda.

Things began smoothly at 8am. We waited just outside of Grant Park with supplies and met some ducks and a squirrel. Around 11, we set up and began handing out safety packs which contained vinegar, earplugs, a paper towel, all wrapped in a bandanna. Everyone was receptive and appreciative, and word spread quickly. A quick thanks to everyone who came today and enjoyed what we had to offer. We’ll gladly do it again in the future.

We joined the black bloc for the march and were part of the initial clash with police as we attempted to head east rather than the directed west. Injuries were sustained from police with clubs. There was an old woman with a walker next to me. Everyone was trying to help her out, but she didn’t want to leave. She remained at the front of the lines yelling, “We’re not afraid!”

We’d like to think that our safety packs played a role in strengthening the black bloc by providing more people with the materials to participate, especially the bandannas. No major incidents on our end, a comrade in jail, but we hope all are well and safe. We’ll update as more projects come up. 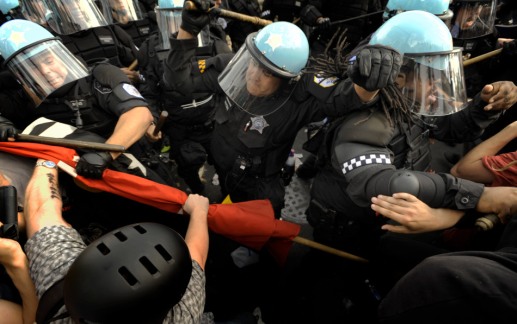 I’m out. Thanks for the concern/support. Several protesters that were locked up with me appeared to have serious head injuries. I’m thankful I had a helmet (the police kept beating my head and arms for some time after I was on the ground and immobile).

Some choice police quotes: “This is Chicago, what did you think would happen?” “What did you expect you’d get for being here?” “Shut UP!” (replying to calls for medical attention for persons collapsed on the ground with bleeding head-wounds)

We were detained for some time on Michigan, just north of Cermak, outside, and then for maybe an hour or more in a police wagon. When we finally got to Belmont and Western, the more seriously injured people were taken away, presumably to get medical attention. After several hours and a lot of paperwork, I was examined by a nurse and given ice packs. We were also fingerprinted by both the state police and the city police. All of the other times I’ve been arrested in Chicago and the suburbs, the municipal authorities were the only ones doing fingerprinting. I have given a report to the NLG, but it was just the basic intake form, not a detailed report. From what I can tell from my paperwork, I’ve been charges with Criminal Trespass to Land and Resisting Police Officer or Aiding Escape.

Encounters on the Street

While at the NATO protests a few weeks ago my partner and I came across a lone Occupier chanting “Cops. Are. The 99%”. Needless to say we were offended. Occupy Chicago’s pro-cop rhetoric has been something that has separated it from many working class and communities of color throughout the city. So we began shouting after him. “No, that’s not true, why are you saying that.” We repeated this several times. And then the unexpected happened. His tune changed and the handful of other people who started chanting with him stopped. It took just the two of us to get this guy to change over to “Cops. Are. The army of the rich!”.

This was almost more frustrating than the initial encounter. If you don’t even know why you’re expressing a certain idea, why bother? And why would you change what you were saying without even the shortest bit of dialogue? How about some eye contact? How are we as militants supposed to confront these people? Did he really have a sudden revelation? Did my intimidating “If Kropotkin and a biker had a baby” appearance just scare him off?

Most importantly is it even worth our time and effort to try and confront this sort of disgusting pro-cop sentiment. Perhaps it would be more important to find ways to help communities who are brutalized racist police, show them ways to organize themselves and watch/film cops when they can, and then try and connect the injustices and harassment leveled on them and their communities by the cops to other struggles of oppression throughout the world.

I believe I did what I had to do then but I believe there is more to do now. That much is glaringly obvious.