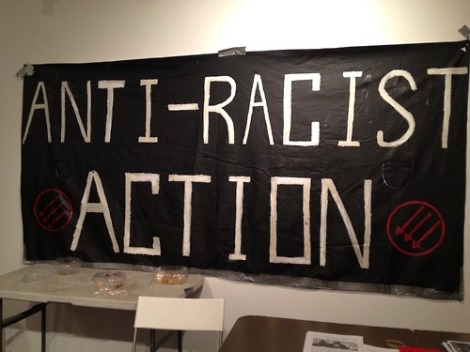 July 31st is the international day of action against racism and fascism. To add to the festivities, Four Star Anarchist Organization put on a film screening of the movie Antifa: Chasseurs de Skins. Short for “anti-fascism,” Antifa is an international movement of radicals organizing direct action against fascism of all forms. The film is about early Antifa groups in Paris and what they did to fight a re-surging fascism in their hometown.

The party started around 7:15pm with the excellent film. We packed quite a few people into the Mess Hall, including people from the Chicago Commune and South Side Chicago Anti-Racist Action. The popcorn and goodies went quickly during our discussion on historic and modern Antifa work. It was really great to be able to talk with others pretty intimately about a form of work so many Chicago anarchists and radicals can get behind. This kind of coming together of tendencies doesn’t happen often in Chicago; we hope this event inspires more of its kind.

For every attendee, Four Star Anarchist Organization donated $5 to the Hoosier Anti-Racist Movement, the group the Tinely Park 5 allegedly are from.

For a fascism free future!