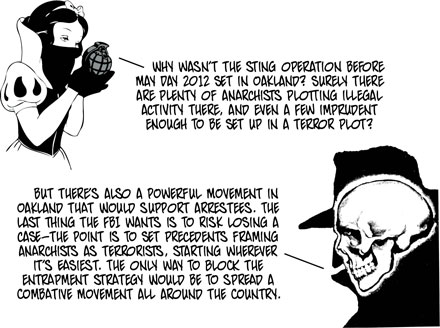 Bounty Hunters and Child Predators: Inside the FBI Entrapment Strategy
The FBI’s latest targets of infiltration and legal repression seem to indicate a new approach to disrupting radical movements — instead of targeting high profile individuals or leaders, a new narrative is being built to conflate those who defend themselves in the face of police repression with terrorists. In this article, Crimethinc gives some possible reasons why.

How FBI Entrapment Is Inventing ‘Terrorists’ – and Letting Bad Guys Off the Hook
Typical Rolling Stone rambling, but brings up some interesting points about the State’s priorities. The far right’s prolific tendency towards murder warrants almost no strategy of disruption like the anarchists face, according to the FBI.

Domestic Terrorism — Anarchist Extremism: A Primer
The FBI has given primers on four domestic terrorist threats – eco-terrorists/animal rights extremists, lone offenders, the sovereign citizens movement, and… anarchists! Considering that the “eco-terrorist/animal rights extremist” movement in North America shares a great deal of ground with the anarchist movement, this article indicates that the State finds our radical social movements to be more of a threat than people who are crazed murderers.

Terrorist Plots, Hatched by the F.B.I.
In this article, the New York Times questions the legitimacy of post 9/11 entrapment tactics. They show how easily someone can be transformed into a rabid, American-hating terrorist by the profit motive. How many lives have to be ruined by the FBI’s eagerness to get a conviction?

NATO 3 Indicted. The Charges: We’ll Get Back to You on That. 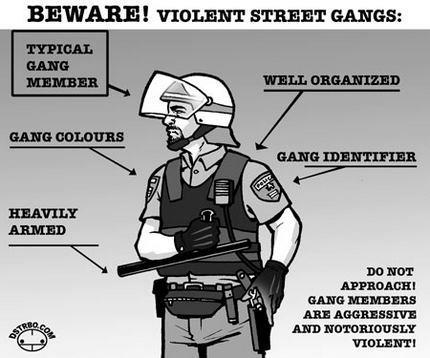